After my 2 day road trip, it was time to spend a day in Christchurch.

Christchurch was very badly damaged in 2 earthquakes in September 2010 and February 2011, and as a result, tour companies seem to bypass Christchurch, or warn you off going there. Stray, for example, only pick up and drop off at the airport. I thinking that is increasingly the wrong attitude.

When I was here in November 2014, I was surprised and saddened to see the mess it was still in. This time, I was prepared. There are still large parts of the CBD that are derelict, or have buildings boarded up awaiting demolition. But there is also a lot of construction work ongoing.

I went to the Quake Museum, which is harrowing at times, though not quite on the scale of the 9/11 Museum in New York. Among other things in the museum, there was a video presentation showing the vision of Christchurch that they are rebuilding. Lots of the architecture that made Christchurch the most English city outside of England has been lost, but in its place is going to be (at least by the looks of things) some really great modern buildings that will take Christchurch onwards and upwards.

I visited the ‘Cardboard Cathedral’, which was erected as the famous Christchurch Cathedral was very badly damaged in the quakes. 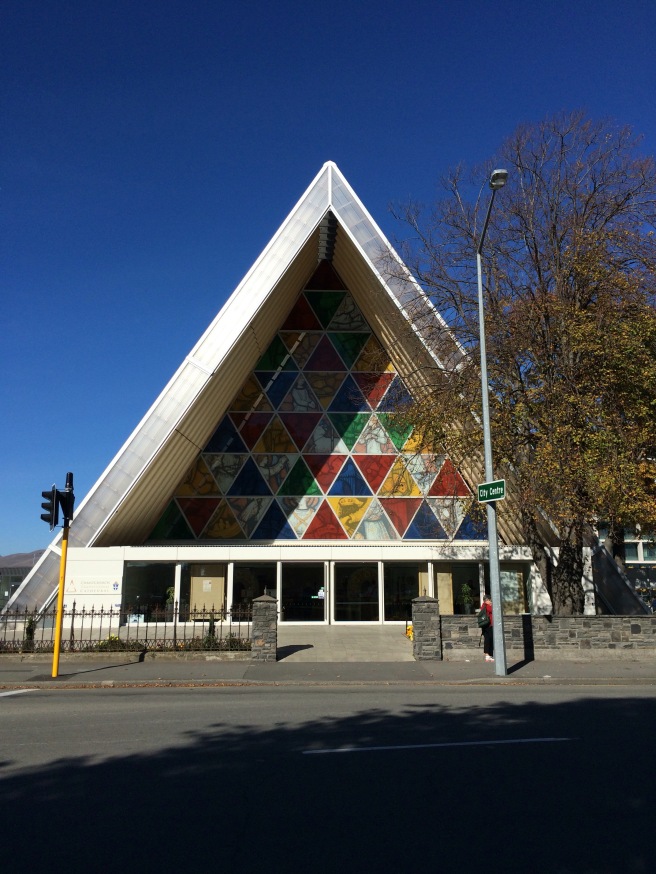 I feel that the original cathedral may be beyond repair, which is a great shame as it was a very fine building which I was fortunate to be able to see when I was here in 2004.

That there are still so many buildings boarded up over 5 years since the earthquake is shameful on some fronts. The pace of rebuild is staggeringly slow for a developed country, but I understand why the cathedral is still there in its delicate state. It was such an iconic piece of Christchurch that it should try to be salvaged if at all possible.

One of the positive outcomes of the earthquakes are the innovative ways that the people of Christchurch (Christchurchians?) have come up with to rebuild their city. One of which is the Re:start shopping mall, which is constructed out of shipping containers. Very Shoreditch. I hope they will keep it in some form once the main shopping areas are rebuilt.

I also visited the art gallery, which seems to have only recently reopened, and the Canterbury Museum. I was very pleased to be able to visit the museum as one of the things I remember very clearly from my first visit in 2004 was going to a museum which had Satsuma-ware ceramics. Mum and dad have similar ceramics at home and I remember recognising them. I was very pleased to discover that they are still here!

I also visited Hagley Park, a large park in the centre of Christchurch, and home to another innovative idea that sprung in the wake of the earthquakes. The Hagley Oval is the new international cricket ground in Christchurch. But I use that in its loosest form. It is actually in the middle of the park, and you can walk right through it. Or you could if they weren’t digging up the square.

This is such a cool idea. All the away around the ground are raised banks, and I guess on match day you bring your deck chair and a picnic and find a patch of grass to sit on. Amazing!

On my long walk around the city, you also come across some very sombre sites, including the ‘185 white chairs’, which are situated across from the site of the Canterbury TV building where most lives were lost.

I walked around the city for about 6 hours, and it gave me a lot of time to think. So, my plea to tour companies would be this: include an overnight stop in Christchurch in your itineraries. There is plenty to see in the city, and the businesses would be very glad of the custom. Christchurch is going to be rebuilt, and it is going to be modern, vibrant and worth seeing. I would love to come back one day and see it when it is complete.