I was picked up from Christchurch airport at about 10am the following morning. Only got lost once driving back to the airport…

We arrived in Kaikoura in the early afternoon. As I was spending 5 nights in Kaikoura, I had quite a leisurely afternoon buying food and chilling out. I had intended to do some laundry but as there was no dryer at the hostel, I decided against it.

The next day I went whale watching. I’d done this when I was in Kaikoura in November 2014, but was being violently sea sick at the crucial photo op point when the sperm whale did its dive. Having sussed out the weather forecast (gloriously sunny) I decided to try my luck again. Having had my sea sickness tablets, I arrived at Whale Watch Kaikoura at 9.30am and checked in. After watching a short safety video, we boarded a coach for the short journey to the dock on the south side of the peninsula.

We left the dock and headed out to sea. Whale Watch Kaikoura pretty much guarantee that you will see a whale as they have listening equipment to listen for the unique sound waves that sperm whales emit. On our way to the location of the whale they were tracking, we were lucky enough to spot some orcas (also known as killer whales). 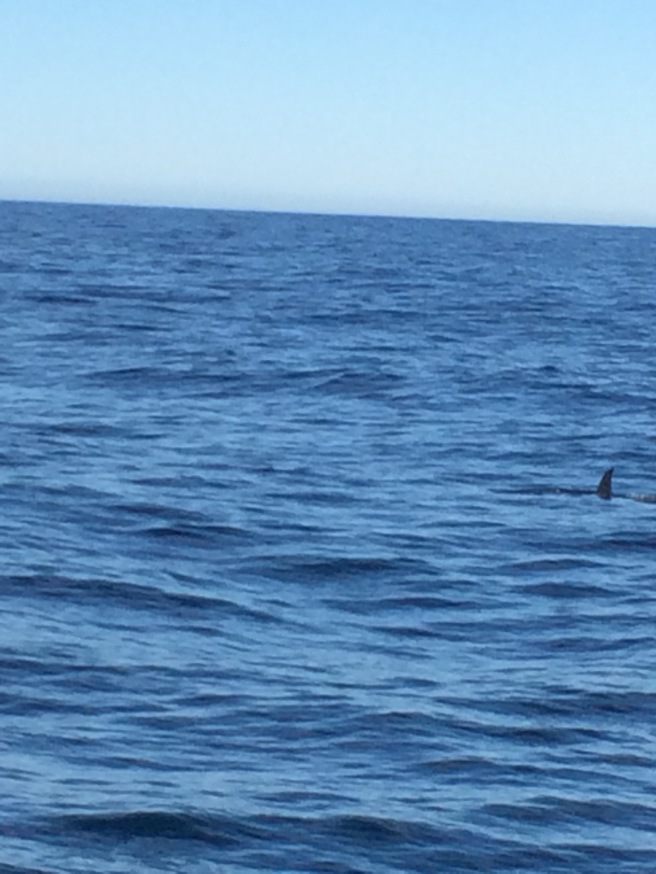 (Bad picture but you get the idea).

As someone who is very prone to sea sickness, I was feeling a little bit queasy at this point, despite the medication, having an ear plug in my left ear, and making a conscious effort to focus on the horizon. We headed off towards the supposed site of the whale and waited for it to appear for its roughly hourly poke on the surface.

Sperm whales have a characteristic spout at about 45 degrees

This whale came to the surface quiet quickly, and we had a side-on view when it dived. 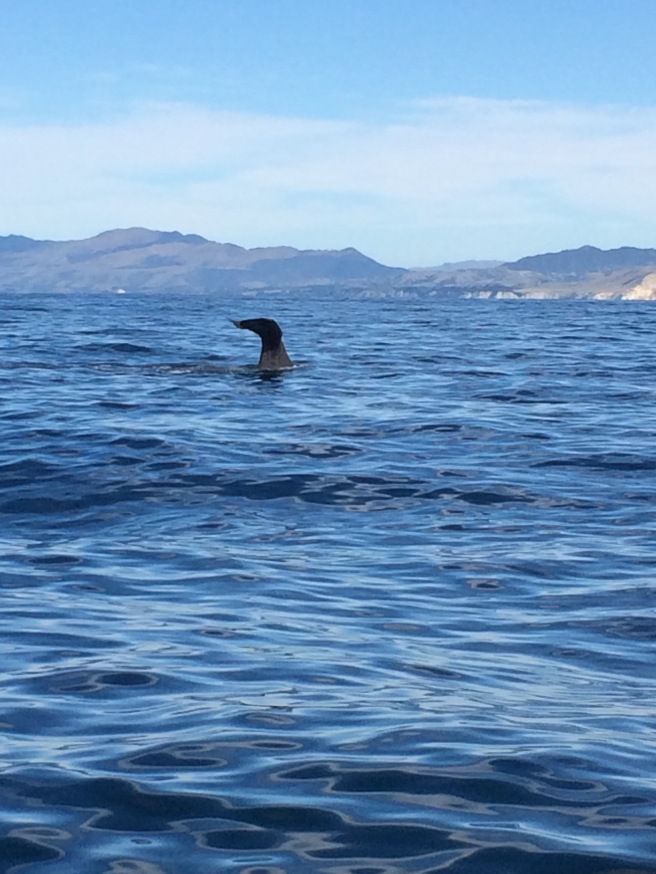 We then headed to another site where another sperm whale was due to make an appearance. We waited there quite a long time, during which I became increasingly nauseous. Just as we were about to leave, the second sperm whale made an appearance, this time we were front on, and I got a picture that I’m very proud of. 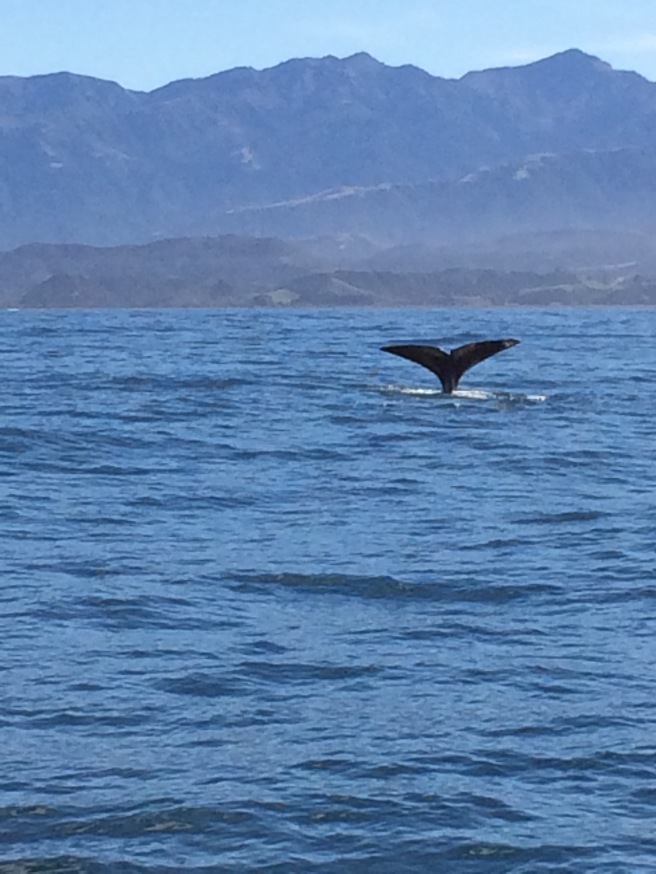 After this we (thankfully) headed back to dry land, and arrived back shortly before 1pm.

As I had not been well, I spent the rest of the afternoon in the hostel, using the fastest wifi so far.

The next day I decided to do the Kaikoura Peninsula walk. This was a 4 hour walk around the Kaikoura peninsula, and back to the centre of Kaikoura. I bumped into some more wildlife on the way. 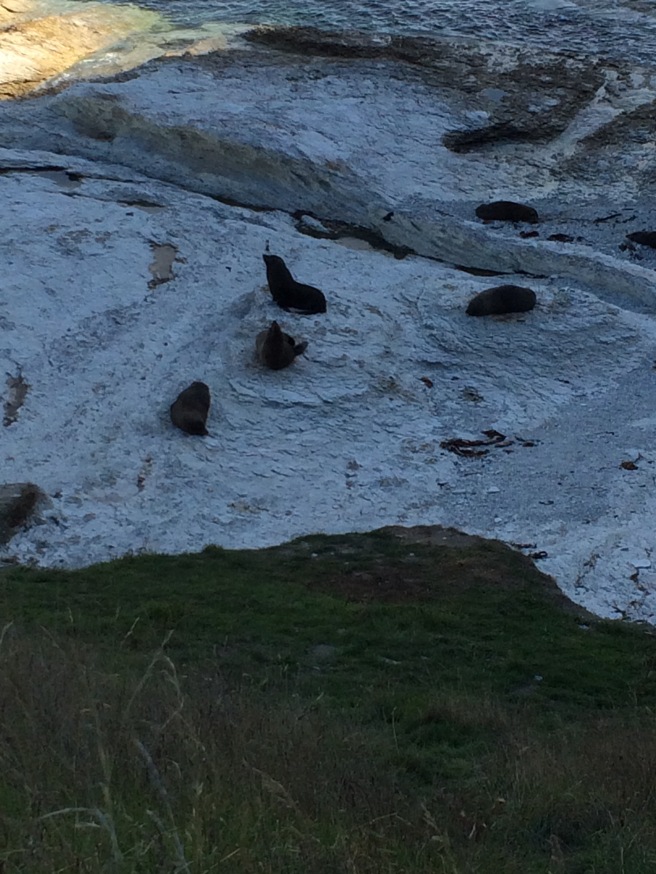 It was a lovely walk and a very nice way to spend a Sunday afternoon.

I still had 2 days lefts in Kaikoura. I had originally contemplated some more sea kayaking as I had enjoyed it enormously in Abel Tasman, but after being quite ill on a relatively calm day, I decided against it. I spent the next couple of days pottering around the town, looking in the local shops and enjoying numerous chai lattes (I think I’m addicted). I also went for my first run in over 2 months. Not terrible but not great. I’m quite pleased that my stamina seems to have improved with all the walking I’ve been doing (though I still hate hills and steps), but my speed is sloooooooow.

On my final morning I got up early to watch the sunrise. 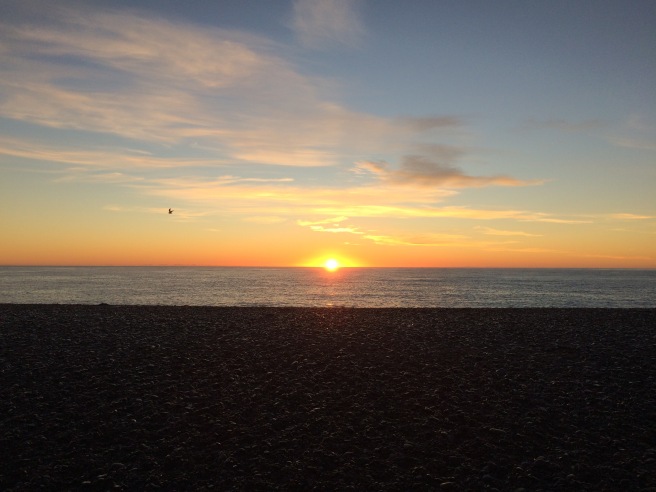 We were picked up from Kaikoura at 9am and then headed up the coast towards Picton. We stopped briefly at Ohau point to look at the super-cute seal pups. This place is like a seal-pup kindergarten as the parents go out to sea during the day and leave the pups to play in the stream. 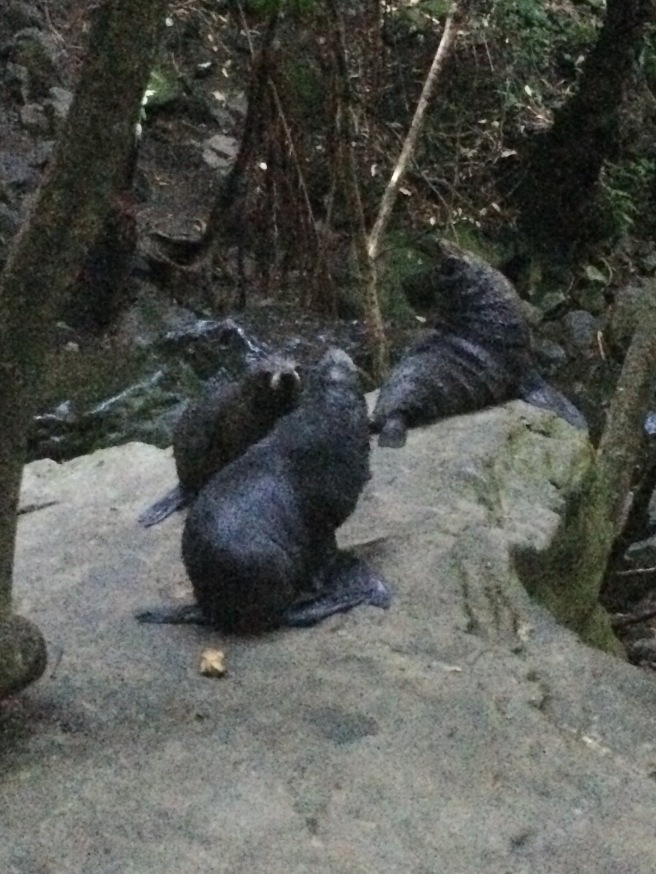 New Zealand, it seems, just carries on getting more beautiful.

The following day, I caught the early afternoon ferry to Wellington. In the morning I went to the Edwin Fox maritime museum, and the aquarium. The Edwin Fox museum houses one of the boats that convicts were sent to Australia on.

It was a perfect day for a ferry crossing. The first hour of the 3 hour 20 minute journey is through the Marlborough Sounds.

Eventually we made it to the head of the Sounds and out into the Cook Strait.

We arrived in Wellington at around 5.20pm, and as it is now definitely autumn, it was already going dark. I headed to the hostel for a chilled evening.

I now had 2 days left in Wellington before heading back to Auckland.

On the first day I took care of some admin – sending stuff home that I don’t need, and hunting around for a printer. In the afternoon I went to the Great War Exhibiton at the National War Memorial. Learnt quite a lot, including that the British, German and Russian royal families were all related (I’m sure I most have known that before but evidently I’ve forgotten how pally Kaiser Wilhelm was with King George and Tsar Nicholas), and the origin of ‘bangers’ as in ‘bangers and mash’.

In the evening I went to see The Boss at the cinema. Very entertaining.

The next day I was struggling to find something to entertain me in Wellington. Having been here for a couple of days 5 weeks ago I think I’ve done almost everything. I had a wander around the Saturday underground market, and some of the shops. Wellington claims to be the ‘coolest little capital’, but I think Cardiff definitely challenges it on that front 🙂

I ended up in the cinema again in the evening. This time it was Eddie the Eagle. I have been to the cinema a lot while I’ve been in NZ, but I never go at home, so why not? This will probably be my last trip to the cinema as America is going to be too packed (I think) to fit anymore trips in. Also, it was an excellent opportunity to see Hugh Jackman looking fiiiiiiiiine.

An early-ish night followed as I was up at 5.45am to catch the bus back to Auckland. Or was I? The bus drove straight past me. Minor panic ensued, and $220 (£110) later I find myself at Wellington airport waiting for a flight toAuckland. Assuming all is well, I’m off to the Cook Islands in the morning for some time travel and some R&R.