This part of the journey was more of what I’d imagined Australia to be. The rain has stopped, the sunshine has been glorious and the scenery spectacular.

After Byron Bay we headed up the Gold Coast to Brisbane, arriving around lunchtime. As we moved from New South Wales to Queensland we gained an hour as Queensland doesn’t bother with daylight saving time. We had a free afternoon in Brisbane so I went with some of the other group members to cuddle a koala – so cute!

We took a ferry barge across to Fraser Island from Rainbow Beach.  Fraser Island is the largest sand island in the world and is absolutely beautiful: 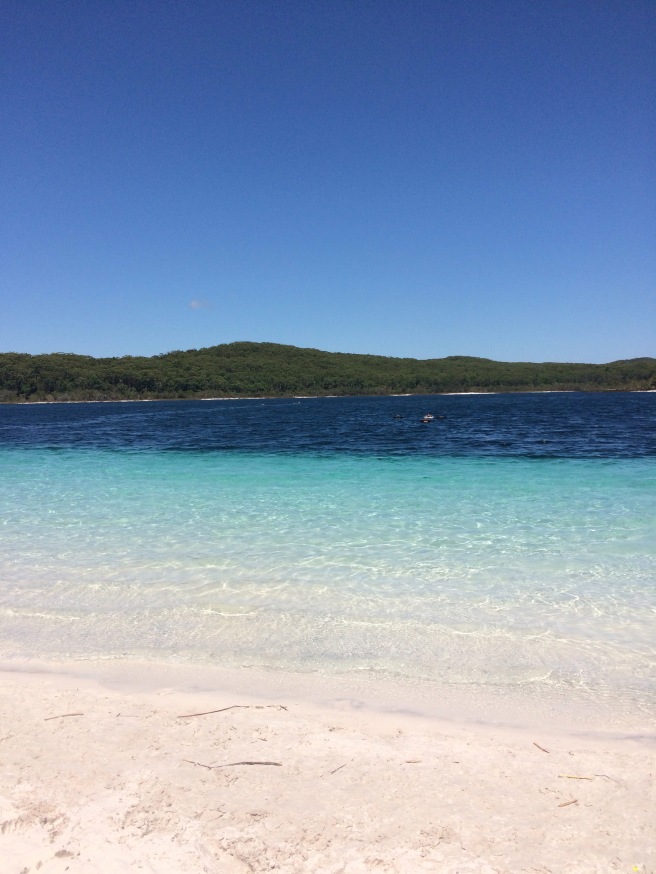 We went for a swim in Lake McKenzie before a walk through the rainforest in the afternoon. 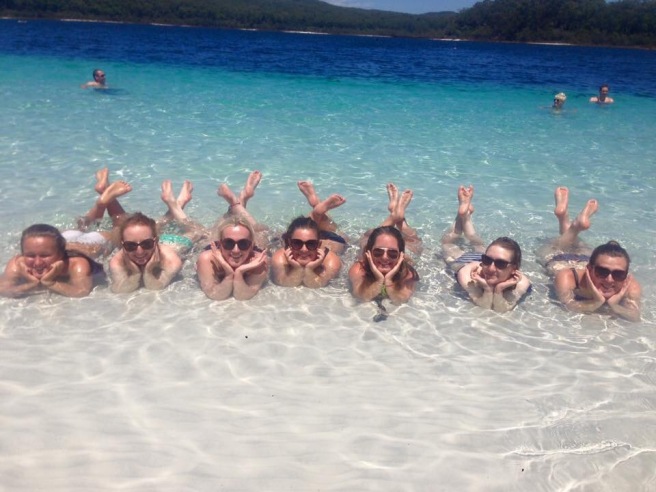 In the evening we had another glorious view of the night sky. Unfortunately I don’t have a camera good enough to capture it but the night skies here have been really unlike anything I’ve seen before.

The next day we headed to the Noosa Everglades for canoeing and camping. Yet more amazing scenery.

After a not-too-bad-if-I’m-honest night sleeping in a tent it was a long travel day to a cattle station just outside of Rockhampton. We slept in a ‘swag’ under the stars. Turned out to be more comfortable than the tent!

The next day was my highlight of the trip so far. We had quite a long journey to Airlie Beach to board a maxi yacht for a couple of days’ sailing in the Whitsunday Islands. We got on the yacht mid-afternoon and set sail. There is something about being on a yacht drinking alcohol in a bikini that makes me feel much cooler than I actually am. We saw a spectacular sunset and partied til late.

My late night partying caught up with me the following day, not helped by a bit of up-and-down movement of the yacht…

We went to Whitehaven Beach in the morning which is just stunning.

Some of the group went diving and snorkelling in the afternoon but I wasn’t up to it in my ‘delicate’ state. After another amazing sunset it was a much quieter evening!

The following day we headed back to dry land and in the afternoon I took a scenic flight over the Whitsundays and the Great Barrier Reef. The views of the reef in particular were awesome and I’m so glad I did it.

Yesterday was a travel day to Cairns, which is where I am now. The heat and humidity is unreal.

Tomorrow the group splits with 8 of us going the Red Centre and the rest of the group going up to Cape Tribulation.

I arrived in Sydney at about 8am on 3rd January after yet another sleepless aeroplane flight. I did otherwise enjoy being in premium economy on an A380 (apparently due to it being so close to New Year, the only seat I could be sold was in premium – can’t complain about that!). There’s obviously something about Sydney as for the 2nd time in 3 years, I spent my wedding anniversary there.

After getting to the hostel mid morning, I dumped my bags and met up with Andrew. We went to Bondi, had chips from Doyle’s takeaway and then took a trip out to the Olympic Park, which is a good 45 mins out of central Sydney on the metro. At this point though the weather was absolutely terrible. Apocalyptic rain.

After that it was time to check in and meet up with my fellow G Adventures travellers. There are 20 altogether in the group up to Brisbane – an even split of native English speakers and native German speakers.

We left Sydney early on the 4th and after a breakfast stop overlooking the Opera House, we headed inland towards our overnight stop at a former sheep shearing station in Nundle. On the way we stopped at a winery in the Hunter Valley for wine tasting. The sheep shearing station was very remote – a place where you have to make your own entertainment. The remoteness did have its benefits though – the clouds parted at night and I saw the most stars I have ever seen.

The following day we panned for gold at a gold mine. I managed to find 4 tiny pieces of gold:

After the gold panning, we headed towards our next overnight stop at Bingara. Yet again the heavens opened and there was a massive thunderstorm. Some of the group had gone horse riding and came back absolutely soaked to the skin.

The following morning we headed out early to watch a sheep shearing demonstration. I think it’s fair to say I’d make a terrible farmer – farm life is definitely not for me. Some of the group had a go at shearing but I just watched from the sidelines. Afterwards we headed to our lunch stop in the Gibraltar Range State Forest – a beautiful location for lunch.

Then we headed back to the coast to Yamba for our overnight stop in a hotel overlooking the ocean. After a brief dip in the ocean, there was yet another massive thunderstorm – at this point it has rained every day since I arrived in Australia – not what I was hoping for during the Aussie summer!

The next morning we headed towards Byron Bay (only a couple of hours drive) and had a surf lesson. This was fun but a bit challenging without my specs on. I did manage to stand up twice (photographic evidence of this will follow later!). After the surf lesson we cooled off in a tea tree lake which was like having a massive warm bath – lush!

After the surf lesson we headed into Byron Bay and to our hostel for the next 2 nights. Byron Bay is a cute hippy town with a number of spectacular beaches.

A few people have compared it to Brighton – having never been to Brighton I can’t really comment but it’s definitely got an alternative hippy vibe going on.

Tomorrow we head into Queensland and onto Brisbane.