When I travelled extensively around the USA in 2016, we didn’t get to either Zion National Park or Bryce Canyon, and they’ve been on my radar ever since. I found the ideal trip with Grand American Adventures which fitted the dates I had off work perfectly.

The trip started in Las Vegas on Sunday evening. On Monday morning we set off for Zion National Park, approximately a 4 hour drive out of Nevada and into Utah. We arrived mid afternoon after a couple of stops for snacks in Walmart and lunch at Chick-Fil-A.

We were staying in Springdale, which is right at the entrance to Zion National Park. After our tour guide gave us a brief rundown of how the shuttle service works (you can’t drive into the main part of Zion Canyon), and talked through some of the hiking trails, we then set off into the park. As it was already mid afternoon, I just hiked a couple of the shorter trails, and admired the awesome colours of the park:

We went for a group dinner in the evening (massive cheeseburger and a beer for me), and then had a fairly early night as I had a big hike planned for the following day.

Angels Landing is one of the 2 most famous hikes in Zion. It’s 2 and a half miles one way, and climbs up approximately 1400 feet. The trail for the first 2 miles is pretty good, well paved and with some decent shaded areas to shelter from the blazing sun. The last half mile is basically scrambling up rocks, with a chain to hold on to, to save you from the 1000 ft drop either side – not for the faint-hearted!: 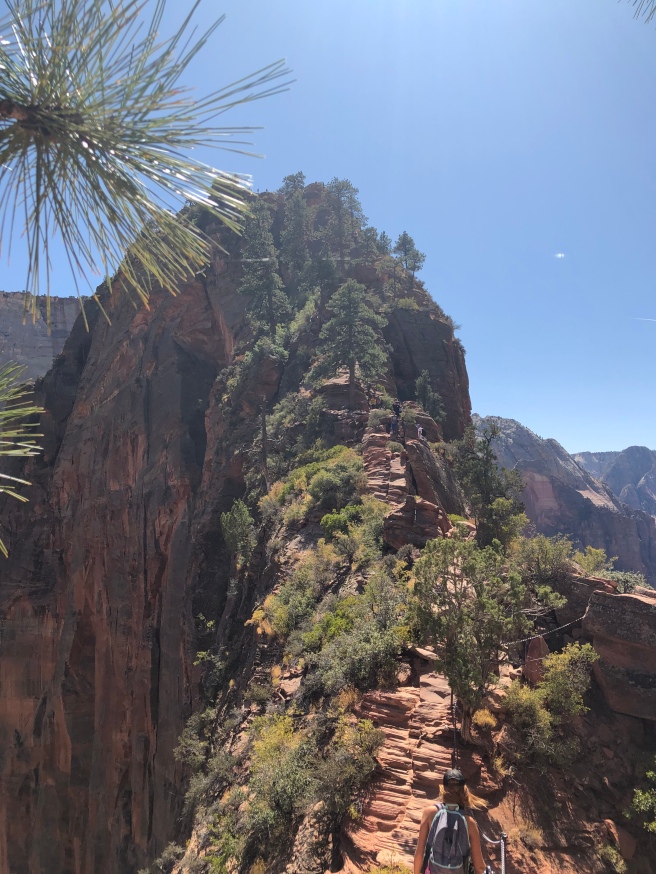 There were also a lot of people on the trail which made this section pretty challenging as there isn’t much room with people going in both directions. The views at the top are totally worth it though. I spent around 40 minutes at the top, having my lunch and soaking up the epic views.

It was somewhat easier to get down, partly because there weren’t so many people trying to come up the chains. I was so proud of myself for completing this hike. To be honest, the chance to hike Angels Landing was the main reason for booking this trip, and I was elated, if completely knackered, after I’d done it.

After that I headed back to the hotel for a soak in the heated pool and jacuzzi – a welcome relief for my aching limbs.

In the evening we went to a Thai restaurant in Springdale which was a nice alternative to American fare. There are not a lot of dining options in Springdale, it’s a functional strip of hotels/motels and easy-dining restaurants catering for the park tourists, so don’t go there expecting gourmet dining!

An unreal view from the hotel the following morning:

Look how blue the sky is!! So clear, and not a cloud to be seen. We set off for Bryce Canyon in the morning.

Bryce Canyon is around 90 miles/145 km from Zion. We arrived around lunchtime and enjoyed our deli sandwiches with a view:

In the afternoon we hiked the Queen’s Garden and Navajo loops into the Canyon, to get up close the the hoodoos. 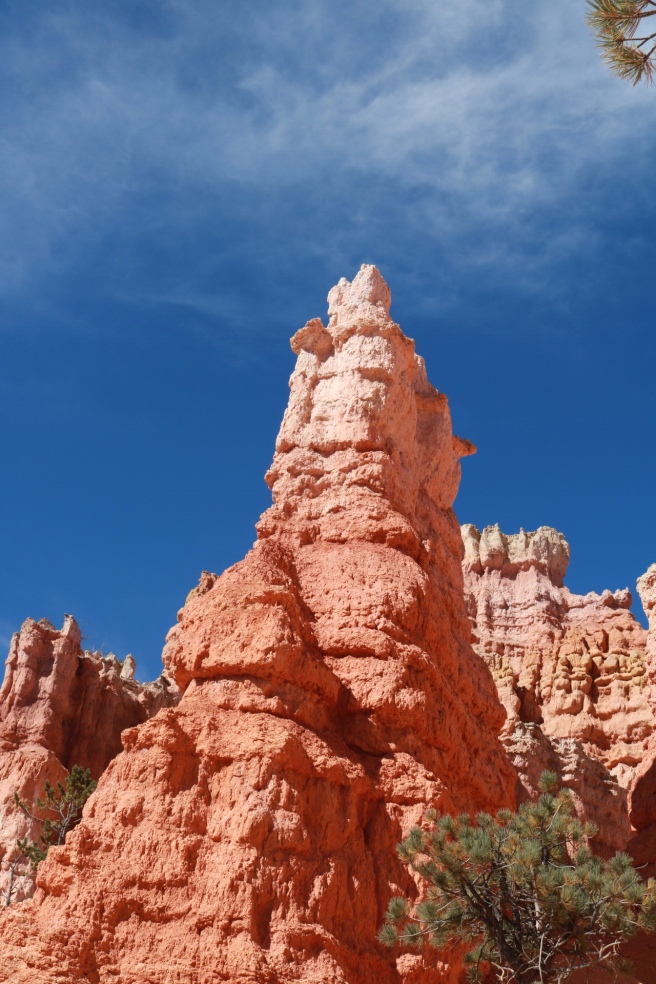 The colours were just spectacular. It was a nice walk in amongst the hoodoos and down into the Canyon, certainly a good workout for my still-tired legs. Afterwards we went to check in to our hotel in Bryce Canyon City (not a city in the traditional sense of the word, another functional strip of hotels/motels and eateries). We ate at a pretty decent buffet in the evening and then headed back into the park for an excellent view of the night sky. It was clear and there was no moon so we could see a lot of stars and the Milky Way – here is a somewhat wonky attempt at some night-sky photography. More practice needed!! (Or a tripod)

The next day was an early start for the long drive to Monument Valley, but that excitement is for another post.

Disclaimer – I am not affiliated with Grand American Adventures in any way, and was a full fare-paying customer on this trip.

3 thoughts on “Zion and Bryce Canyon”