After a quick overnighter in Queenstown, it was yet again early on the road as we headed to Milford Sound. After a stop in Te Anau for Milford Sound cruise tickets and Stewart Island ferry tickets, we drove through part of the Fiordland National Park to Milford Sound. The weather wasn’t great, but they get up to 9m of rain a year here so you’ll be lucky if the weather is good. 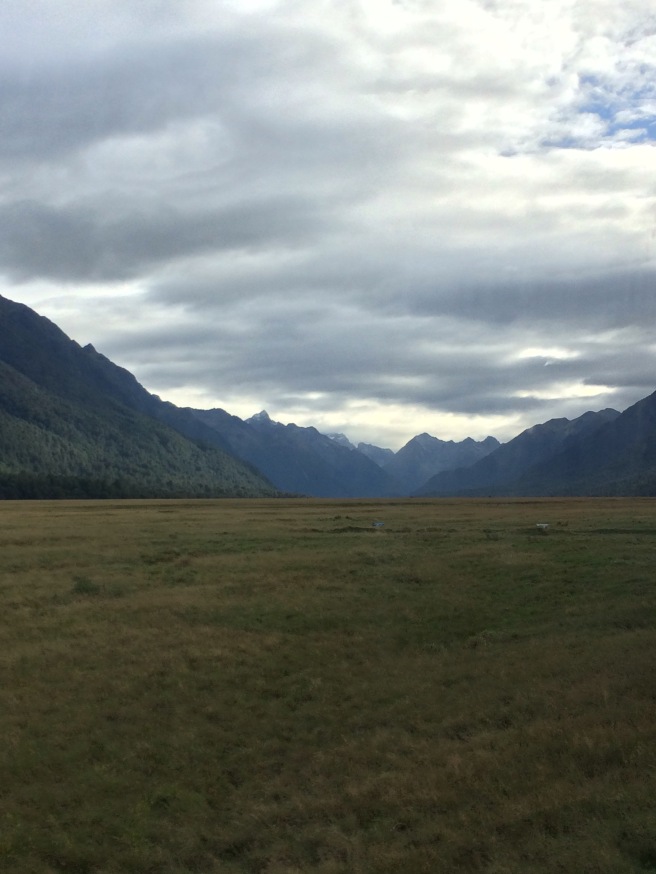 At Milford Sound we went on a scenic cruise for about an hour and a half. I have to say that this was the most disappointing part of my trip so far. It was raining and the clouds were really low. Now, when I was here in November 2014, the weather wasn’t great either. However, it must have been even more rainy then because there were hundreds of waterfalls on Milford Sound, and it looked amazing. This time there weren’t as many waterfalls, and it was difficult to see the surrounding landscape because of the low clouds.

I wasn’t the only one who found it disappointing (although I guess a lot of that disappointment was in comparison to last time), others on the bus also found it underwhelming.

We spent the night at nearby Gunn’s Camp. This was originally built as accommodation for the men who built a tunnel through the mountain so that you could access Milford Sound by road. It isn’t your usual type of accommodation. The cabins were heated by wood burners, and electricity was available from a generator between 6pm and 10pm only. The hot water for the showers was also heated by wood burner, and I have to say it was one of the hottest showers I’ve ever had.

The next day was quite a leisurely drive from Gunn’s Camp, back through Te Anau where we stocked up at the supermarket, and onto Bluff for the ferry to Stewart Island. We made a few stops along the way for photos, and this is one of my favourites on the way out of Fiordland:

We arrived in Bluff just after 4pm, and after a quick stop at the signposts, it was time to board the ferry to Stewart Island.

The crossing takes about an hour, and was apparently a relatively smooth crossing. I wasn’t taking any changes and had already had my sea sickness tablets.

Stewart Island is the 3rd largest island in New Zealand, and is home to a lot of wildlife. It’s also your best chance in NZ of seeing a kiwi in the wild, as well as the aurora australis (southern lights). Unfortunately I saw neither whilst I was there.

I was staying 2 nights, and the ferry back wasn’t until 3.30pm so I had 1 and half days to explore. On the first day I took a water taxi to Ulva Island, which is only a 10 minute journey from Stewart Island. Ulva Island is pest free and home to a lot of bird life. There are a few walking tracks around the island and I spent about 4 hours there walking, trying to spot wildlife, and enjoying the solitude. It was so quiet and peaceful (aside from the birds chirping away) that it felt like I was the only person in the world.

After getting the water taxi back to Stewart Island, I walked back to the hostel in Oban around the coast from Golden Bay.

The next day I decided to walk in the opposite direction, to Horseshoe Bay, and then back to Oban. 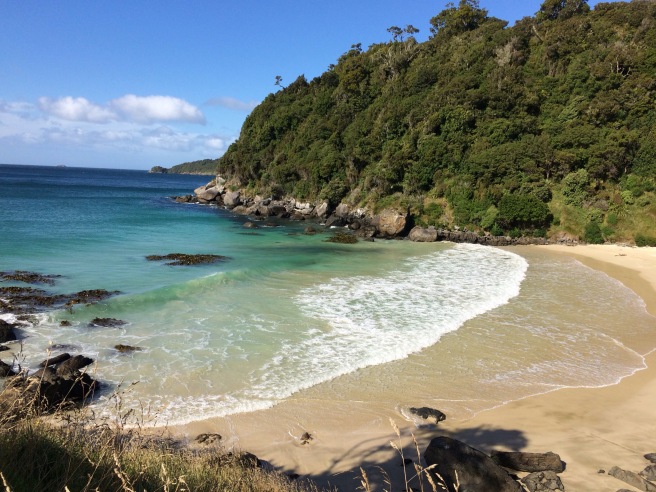 The weather turned a bit in the afternoon and the crossing back to Bluff was rather choppy. I was even more glad for my sea sickness tablets on the way back. A couple of young kids seated in front of me did not enjoy it at all.

We arrived back in Bluff and then I caught the shuttle bus to Invercargill, where I was staying the next 2 nights. Thankfully only 1 day though as there is not a lot to do in Invercargill. It is not a beautiful town by any stretch of the imagination, and has a certain Wild West (Deep South) feel to it.

I went to the museum, which had an interesting exhibition on sub-Antarctic islands which, to be honest, are part of the world I didn’t even know existed.

After a long walk around the park and a slightly disappointing chai latte in a local coffee shop, I headed back to the hostel to start writing this. (It’s several days later when I finish it!)

In the evening I went to the cinema (again). This time I tried out a kiwi film – The Hunt For The Wilderpeople. It’s got Sam Neill in it, and the kid who plays the lead is great. I can’t imagine it will get a wide release in the UK. Maybe in an arts cinema (maybe Chapter in Cardiff), but if you come across it, it’s well worth a watch.

The next day we went to The Catlins, which is an area on the south coast about 70km east of Invercargill. We spied some dolphins but sadly no sea lions, even though they are quite common in this area.

After picking up some people from the Stewart Island ferry, we hot-footed it back to Queenstown.

The next day I headed south again, on a day trip to Doubtful Sound. Doubtful Sound is much bigger than Milford Sound, and is more difficult to access. We drove to Manapouri before taking a boat trip across Lake Manapouri. We then drove over Wilmot Pass (which is not connected to any other roads in NZ) before arriving at Doubtful Sound for a 3 hour cruise.

I really enjoyed this cruise, we saw bottle-nosed dolphins, and although it was raining a bit, the clouds were much higher than they had been at Milford Sound, so we were able to enjoy the waterfalls and the scenery.

We had an eventful journey back to Queenstown. Our bus broke down so we all had wait a short while for a couple of the other buses in the area to pick us up. We got back to Queenstown at 8.30pm, after a 7am start, so it was a long day. And after a long day, there’s only one way to finish it off in Queenstown – with a Fergburger. The best burgers in the world. Also, with it being quite late on, there was no queue!

Time to head north tomorrow, to the Mt Cook region. Fingers crossed for decent weather so I can get out walking.